MINUTES:
a. General: Meeting convened at 0930, and everyone was welcomed into fellowship.

Following the reading of the above Jack McMasters offered a prayer of support for all.

c. Old Business:
(1) Minutes of the 18 Apr. 2009 Regular Meeting. Minutes were read and discussed. A motion was made, seconded, and carried to approve the minutes as read. (CLOSED)
(2) Treasurer’s Report: (as of 30 Jun. 2009): The following treasurer’s report was presented and read into the record: (CLOSED)

(4) Committee Reports:
(a) Outreach Committee: During the period 1 Apr. – 30 Jun. 2009, the association expended $3,301.93, for charitable donations in memory of fallen members and support for wounded warriors, and numerous flower and plant arrangements, and cards that were sent as support to members and member spouses who found themselves in distress during this period. (CLOSED)

(b) 2008 Reunion Report: Jack McMasters reported he hopes to have a continental breakfast at the new EOD MBI building and then to the new Eglin EOD building. Sunday picnic will be at the CE pavilion. (CONTINUING)

(c) Association Building Committee Report: Jack McMasters reported the groundbreaking and signing the contract had been accomplished. The contractor is pulling permits for ground clearing. Jack and George Hughes met with the contractor regarding building changes. Preliminary drawings are expected this coming week. It was discovered that the City of Niceville is planning a city sewer system installation near our building location. As a result, plumbing will be for both a sewer system or septic to facilitate sewer hookup at later date. He asked everyone to be thinking about how to display historical memorabilia. Jack also noted that Kathy Calhoun has volunteered to furnish the building’s front door and Tammy Smith is providin an EOD Badge stained glass window for the door. (CONTINUING) 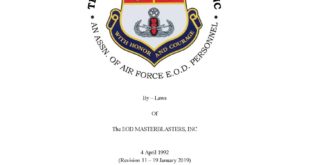